We were without internet at our house for over 24 hours this weekend.

One would have thought my children were deprived of food, water or shelter with the level of suffering they claimed to be enduring.

When we finally got our internet back the victorious cry was one you might expect at the end of a movie when the good guys defeat the bad guys threatening to destroy the planet.

Of course my husband and I missed the internet, too, but it amused me how the loss of internet affected so much of my kids’ routine. No Xbox live. No YouTube videos. No Doctor Who on my Kindle.

But I was sympathetic. I know how upsetting it can be when things aren’t working for you the way you want them to as I have also been facing other computer issues myself.

I bought a new laptop PC from work because the laptop I had been using fell and the screen got destroyed. I can use the laptop but only with external monitor, which means it is essentially a desktop now. It’s in my oldest’s room now.

So I am excited to have a laptop again, but I needed programs – Word being most important because I need to write.

The computer I purchased had in outdated OS. It came with Vista which apparently is compatible with … nothing! 😉 Seriously though it was not working for me to get Word or Scrivener. Basically all I could do was get on the internet – when my internet was working 😉

Thankfully when I told my dad about my predicament, he had Windows 7 he bought but wasn’t able to use. Ithink I successfully updated it to new OS but I’m not certain yet.

Once I confirm if OS install successful, I will try Word & Scrivener.

So tonight my fingers are crossed that all goes well with OS install and that our internet sticks with us.

Have a great week.

Do you ever find a movie, or a book, or a TV show, something that catches you in just the right moment?  Speaks to your current mood?  Makes you smile?  Makes you happy?

The movie, Begin Again was that movie for me this weekend.

I went to see it without knowing much about it except that it had Keira Knightley (who is Elizabeth Bennet in one of my favorites, Pride&Prejudice) and Mark Ruffalo (Bruce Banner in the Avengers, but also lovable Matt in 13 Going on 30).  I knew it was about music, but that was about it.  I went in with no real expectations.

I really enjoyed the movie.  I had a friend post on Facebook a brief review that said it started out kinda angsty – and I would agree.  It starts out establishing where the characters are at in their lives when they meet. Neither is in a good place.  The story really gets going when they meet and begin to work together.

Ruffalo’s Dan is floundering professionally and in his family life.  He has lost control of his music development and production company and is estranged from his wife and daughter, living in a sad little apartment alone.

Knightley’s Gretta is a singer/songwriter who came to New York, “tagging along” with her emerging artist boyfriend and is essentially lost in the shuffle as he takes off into his new rock star life.

Dan has previously shown talent for finding new artists and helping to develop, nurture and market them.  He sees Gretta’s potential and wants to work with her.  The movie centers on that partnership.

What is so fun, so joyful about this movie is that they both are at a point where they can have a ‘Well Why The Hell Not?’ attitude and can take chances.

Why not try this crazy idea of recording this album together?  Why not challenge what’s conventionally done? Why not bring in artists that might not otherwise be used?  Why not take a chance on ourselves and others?

The heart of the movie, where it really sings, is where they are recording the demo all around New York.  Everyone seems to be having fun with it.  Dan comes to life again during the process and the joy is infectious. I don’t know about the others in the audience but I was having fun along the way, too.

I also enjoyed the interactions between the characters, especially our main characters, but also all of the many in the great cast of characters.

Dan’s relationship with his daughter, Violet, played by Hailee Steinfield, starts out awkwardly, but then builds as the movie goes on and you find yourself cheering for him to mend that relationship and really be a dad for her.  His wife, played by Catherine Keener, doesn’t get nearly enough screen time because she’s fantastic.

Gretta’s boyfriend, Dave, played by Adam Levine is believable, if a little unlikeable. You can see the star quality, the performer on the stage, but despite his real life wattage, I
mainly just hated his beard.  🙂

The character I absolutely love in this movie is Gretta’s friend, Steve (James Corden) from back home that she finds in the city. He seemed like the kind of friend we all would love to have.  He sees her in a moment of heartbreak and literally drops what he is doing to hold her.  He comforts her, but he laughs with her, too.  He pushes her when she needs it and supports her through it all. I just loved him.

What really spoke to me in this sweet little movie was the theme of beginning again. 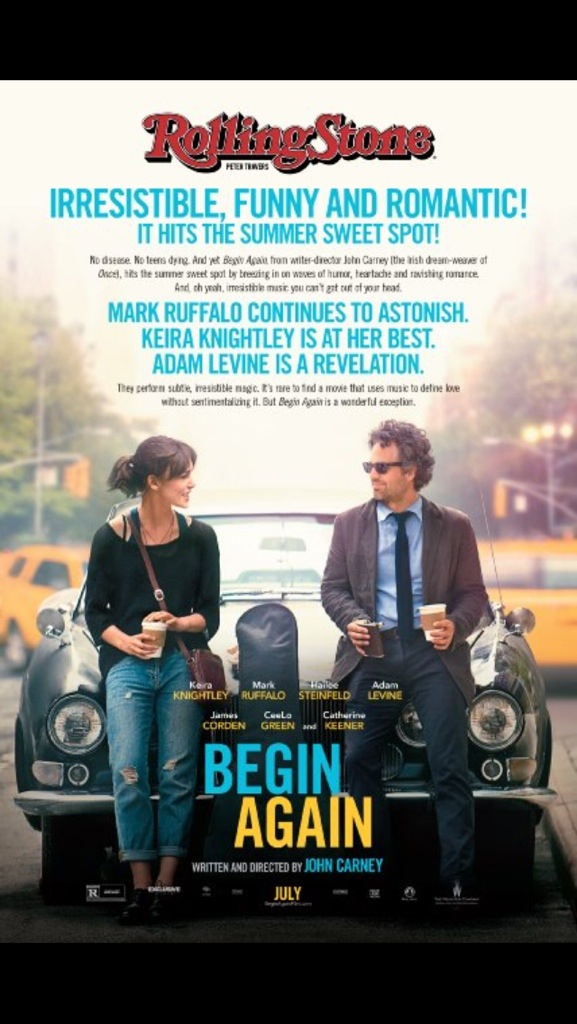 I apologize for missing my post last week. I was on a wonderful 10 days off from work and I kinda let everything slide. But I am back to work tomorrow, so here is my back on track weekly blog post.

Despite having time off, I have stalled quite a bit finishing my biggest project by playing around with a lot of little ones. I have stuck to my commitment to write every day, but I frequently write in a rather directionless manner. I’ve decided I will need to alter my goal and will be more specific in the next 365 challenge. But, one fun bit about allowing myself such a great deal of freedom as to what I write is that I’ve played around a lot with poetry.

Tonight I thought I’d share one with you and thank you for checking in with me. Have a great week.

Together they stood still
Wrapped in his arms, she shook
From the pain of the news.

People moved about all around
Talking of their day
Or what their night would bring.

A shopkeeper swept the sidewalk
Outside the door across from
Where they silently stood.

A child played in the water
Of the fountain down the way-
Ignoring his parents’ demands.

The sun beat down on their skin
No air moved, only the brush of
His kiss on her brow registered.

Pain of her loss burrowed deep
But only he could bring her round
And reach her in the stillness.

Do one. Do them all. But do something.

Cooking with a Wallflower
Down Home Thoughts

Thoughts on Health, Wealth and Character

Darling, You Should be Writing.

Studying, blogging, reading and writing with a large cup of coffee nearby

because reading also involves the way your head rests on your hand as you lean over a book, the damp mark you leave on a page when reading in the tub, or being interrupted by a

There are no foxes here

http://penpaperpad.com
The Gad About Town

inspired by the sunshine & squalls of life.

Stories, poems and thoughts about things I find interesting!

self-care is a revolutionary act

Words on a blackboard

In a world of poems, words steal love and put it on a blackboard

"Of this I am certain: The moment you said, "You are..." I no longer recognized myself. ‪‎I am‬ more than the woman you see. "